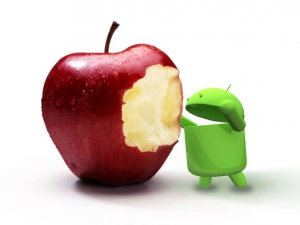 My cell phone contract recently came due for an upgrade and like any tech enthusiast I jumped at the chance to get a new gadget. I’ve been using Android devices for a few years now and have really liked them. They have their shortcomings but what phone doesn’t? My most recent Android phone was a Droid X. I had upgraded from the no-additional-naming-needed “Droid” two years ago and was very happy with the device. It had a huge screen that was great for reading email, web pages and watching video. It also felt far more “complete” than my old Droid.

The main point of contention for me with the Droid X was the camera. When the it first launched it was touted as being the newest greatest phone with a major camera upgrade. HD VIDEO! BEAUTIFUL PICTURES! GET READY TO HAVE YOUR MIND BLOWN! Well, I bought it and excitedly took pictures and videos and was extremely underwhelmed. I tried to blame lighting (or lack thereof), my own shaky trigger finger and a million other things so my new-toy-enthusiasm wouldn’t die too soon. But in the end, it was just a sub-par camera. Other than that issue, I was actually very happy with the device. I added a 32GB storage card and used it all the time for everything from work to play to entertaining my kids. But, like with any phone, two years later, my trusty Droid X had become a rusty Droid X and it was time to upgrade. The question was: do I stick with Android or try another platform? Should I jump into a Windows Phone? I’ve heard nothing but good things about them and it would likely work great with our company’s Windows based cloud environment. Or, should I switch over to an iPhone? I own a MacBook Pro, Apple TV and an iPad and I keep hearing about how well all these Apple products work together.

Since I’m always up for something new and Verizon has a terrible selection in the Windows Phone department, I got an iPhone 4s. I knew it had a good camera and was really wanting that pain to go away from my last purchase. I’ll say up front that my expectations were pretty high based on the hype. I had literally been told by intelligent peers with no hint of sarcasm “This phone will change your life.” I’ve now had my iPhone for a few months and feel I can give it a fair assessment. Here are the pros and cons of my new iPhone compared to my Android device. I’ll start by being nice…

As bad as the bad section above sounds, I still really like the iPhone 4s. I especially like it for the media aspects like pictures, video and music. (Ironically, the things I was hoping to use my iPad and MacBook Pro for then discovered they weren’t any better than my Windows options. But that’s another post for another day.) I can take pictures and videos, edit them together with title slides, music, transitions and credits then upload it to YouTube in a matter of minutes right from the phone. The call quality is great and I enjoy using it with my Apple TV at home. It’s true the apps tend to cost more, but they also look and work better so I’m OK with paying $.99 for most of them. I’ve also found a few good sites for keeping track of when paid apps offer deals and are either steeply discounted or free (For example.). There are little things like a back button, file browsing, LED notifier light and widgets that I miss about my Android phone but I honestly don’t miss them as much as I thought I would.

The truth is, one phone really doesn’t blow the other one out of the water like Apple and Google would like you to believe. The iPhone didn’t “change my life” as my friend predicted but an Android phone wouldn’t have either. Knowing what I know about the iPhone compared to a comparable Android now, I would have made the same decision to switch to iPhone. As for next time; who knows? When it’s time to upgrade my phone again, hopefully Microsoft will have some good Windows phones on Verizon and I can take one for a spin. In the meantime, I’ll be using my iPhone to take really nice pictures of a map so I can find where I’m going.